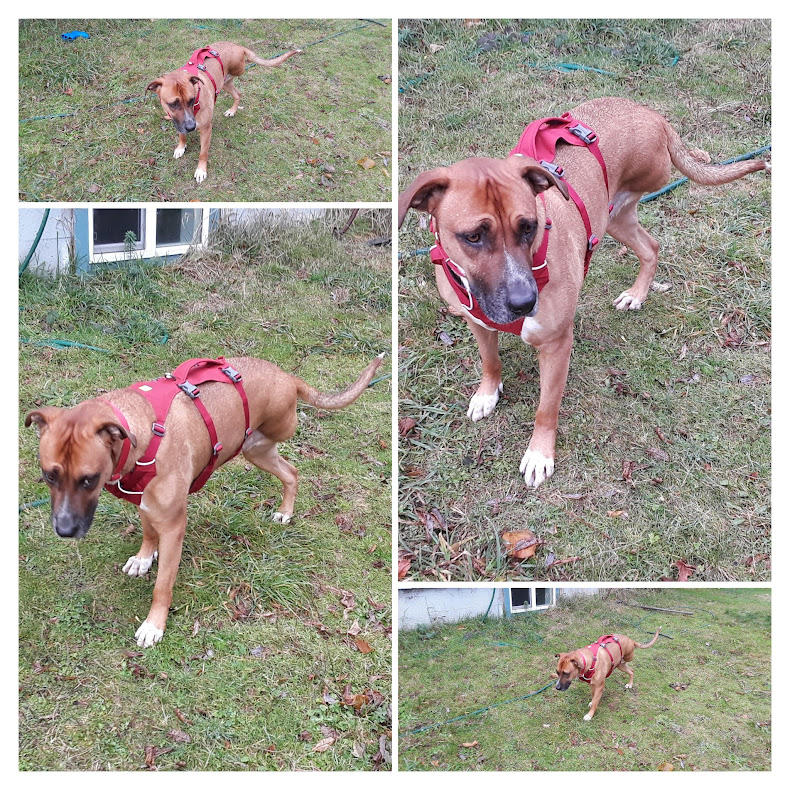 Dudley is not a fan of harnesses. Dudley needs to wear a harness because his stubborn butt loves to jam on the brakes and use his bully breed neck and front end to resist moving forward when he doesn’t want to. He does the side eye and is the master of making me feel bad when I need to move him in a direction that he deems beneath him.

I had the same issue of control with my former dog, a 110 lb GSD. He would throw a massive fit if I would make him leave the dog park while he was having fun. He was good with wearing a harness but it was embarrassing to have to drag him away while he was barking a massive GSD bark because Mom was making him leave the party early. My acupuncture vet who did acupuncture on Kota (my GSD) for almost 3 years summed it up quite well. He said that the herding breeds don’t like to lose being in control. Dudley is the same. He is used to giving the sad face and getting what he wants. Unfortunately, he has me for his Mom.

I am sensitive to the emotional sides of my critters but I also am willing to give that push to the boundaries that they have. My poor old lady cat who is basically blind gets manipulated into position to have her claws trimmed. I might have a bunch of scratches on my leg but I do manage to do most of the trimming in one go. I give her lots of love and comforting afterwards but it’s still a difficult but necessary task. Dudley with the harness is another piece of patient work in progress.

He is perfectly fine wearing the harness while he gets up to eat. I don’t think there is anything that would stop him from being able to make it to the food dish! He would just turn himself into a seal and wriggle his way to the food. The last time I put his harness on him, he jumped up and I buckled the straps on both sides. I could see his expression at that moment say “oh, crap. I just gave her what she wanted” He was particularly put out when I put the harness on him and then was able to hoist him into the back of my mom’s car to go to Thanksgiving dinner festivities. I try to make sure that the harness ends in something fun and rewarding. He sure did find eating a little wedge of pumpkin pie with whipped cream rewarding after my youngest nephew decided he didn’t care for pumpkin pie!

The funny thing about this new puppers is that he has so many things where he is stuck in the past, but he gets it…when there’s an experience he found to be not so pleasant and then all of a sudden, it is actually pretty awesome! Dealing with the newness of being both a shelter dog and a recent amputee, it is so rewarding to see that click in the brain happen. On Sunday, we were getting ready to go over to my sister’s house so I could do my usual laundry and visit with the family routine. Dudley is not a fan of riding in the car. He starts to quiver and lick his lips but he actually hopped in the back of the car before he realized what he was doing. We can do a car ride of 12 miles on the back road to my sister’s house with no panting. He does do a lot of lip smacking and a little bit of quivering but he tolerates the ride. As soon as we get to my sister’s house, he becomes the inspector of beds and cushions. He has a floor cushion that gets laid out for him in the living room and he also goes in and inspects the computer room for crumbs, etc. He pokes around in the kitchen and inspects their recycling for anything…before planting himself on his floor cushion. The nephews will come and give him pets and massages and he will give them a good sniff.

When we did our Thanksgiving family dinner, Dudley got settled in quickly. He hadn’t met my little brother yet but quickly introduced himself when my brother pulled the turkey out of the oven. Dudley is actually quite a bit of a gentleman about being in the kitchen. He’s a little bit in the way but isn’t super pushy. And he excused himself to the living room while we had dinner. No begging or being pushy about food. He does consider any plates at his level fair game…

This site uses Akismet to reduce spam. Learn how your comment data is processed.

About Your Tripawds Blog:

New Tripawds Bloggers: Please review your default first blog post for help getting started with your blog or review the Help Videos in your dashboard. Edit these widgets from your Appearance settings to remove this notice, upload a custom header photo, or choose from 130+ themes, and much more!

Dudley is brought to you by Tripawds.
HOME » NEWS » BLOGS » FORUMS » CHAT » YOUR PRIVACY » RANDOM BLOG